Liz LaManche asked me for help on a fascinating project; it involved recording hand motions from participants so that they could record their own sequence of colors and play them back. 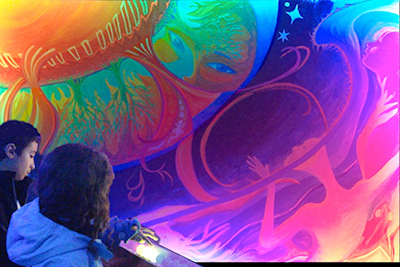 A full description of the project is here; it was a great hit at First Night 2014 in Boston. A video of it in action is here.

Although the system and code for the Octolively was able to be changed, the decision was made to NOT fiddle with it, in keeping with the classic dictum ‘don’t fix it if it ain’t broke.’ By tapping into the signals from the Octolively, we were able to use it to trigger signals on the Arduino Mega for recording functionality. Also, by keeping the Octolively “stock”, it made possible replacements far easier down the road. It was also a great deal easier to tap into a physical signal from the Octolively, rather than understand and modify the Octolively code on short notice.