A colleague of mine was asking about cheap ways to measure water flow via non-invasive methods in a pipe. The ultimate goal was to see if water flow into a house could be detected. He was concerned about small water leaks, and thought there might be a way to find them. There are plenty of non-invasive systems (using ultrasonics), but they are a bit costly.

Our thought was to use temperature; by measuring the temperature of water into a house just at the entrance, and at some other point, some signal could be found to detect flow.

The experimental setup is here: 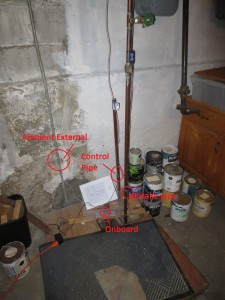 The data was collected using a simple Arduino/SD card setup; the code is available here: logger_temperature_20140708. The same thermistor-resistor pair used in the Thermistorcator was used.

This system was only run for a short while, but our first data showed some pretty interesting results. Turning on the tap, or flushing a toilet really makes a significant difference in the temperature; you can even see when the toilet stops filling. The thermistors and DS18B20 sensors track pretty well (the spikes in the temperature were caused by putting a warm hand on the sensor, for test purposes). 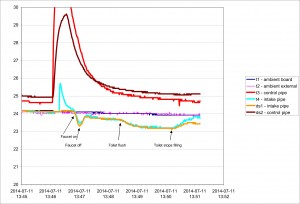