Feedback for users – The Power Box

As much as everyone likes to reduce cost to an absolute minimum, the addition of a few indicators, meters, or small displays can make a world of difference for the end user. Unless there is an incredibly pressing need to not have them, having these indicators gives feedback as to the state of the system, and can help debug things in the field or in the shop. We are a big fan of putting I/O indicators on complex systems, so that it is easy to determine if the actual input (or output) is working, or if something in the control system is wonky.

Recently, an upgrade was made to some “power boxes” for a local arts festival held in a remote wooded location (off the grid). The system consisted of simple deep cycle batteries in a box, so that a modicum of power could be used for some LED lighting and phone/radio charging. The box can handle two different sizes of deep cycle batteries, uses standard Anderson Power Pole connectors (standard for ham radio folks) for the LED lights, and has a cigarette lighter socket option for accessories that need it. It is pretty simple: 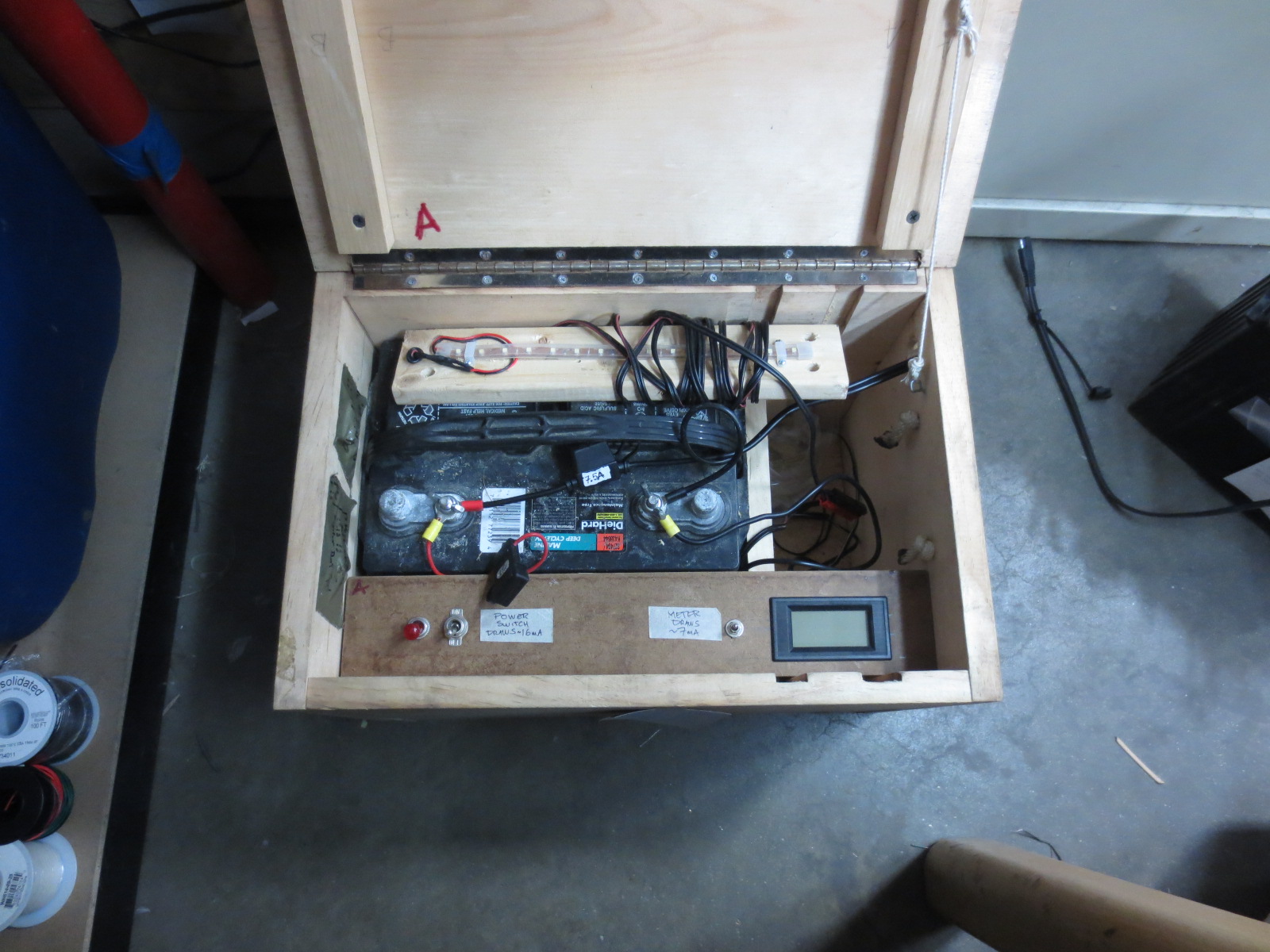 The schematic of the system is shown below; again, it is pretty simple (a battery, a fuse, and a few switches and connectors). The charger can be a traditional charger, or, for long-term storage, a battery tender, which keeps the battery properly charged over a long period of time.

In the first iteration of the box, a main switch with an internal LED indicator was used; it cost a wee bit more, but gave feedback to the user if it was on or off – kind of critical when you have such a system; you want to make sure that the power is off, so that the battery isn’t drained when not in use. The switch LED draws 16 mA, which is pretty small compared to the typical current draw (but not small – this will be probably be replaced with a simple switch and a really low intensity LED). A typical 12 V deep cycle battery (24M) has anywhere from 50 Amp-hours on up, so even with the switch on, it would take a long time for the power to drain appreciably from the system.

This works great, however, what we are really missing was a ‘gas gauge’ for the battery, telling the state of charge for the battery; is it 25, 50 or 100% charged? We don’t want to let the battery get too low (since that can ruin the battery), and if it does get low, we’d like to bring it back to the charging station. You can measure the state of charge of a battery by its voltage, but that means having to bring out a voltmeter to the station, and have someone know how to use it.

The charging and discharging of batteries is a complex subject; temperature, load, chemistry all must be taken into account. For 12 V lead acid batteries, the amateur radio world uses a value of 10.5 V for how low you can take the voltage, and reconnecting the load when the battery goes above 12.0 V. The next addition to these power boxes is to add a small buzzer/LED combo that would warn when the voltage gets to this point, like the ‘near empty’ light on the gas gauge on your car, or a low voltage disconnect (LVD) circuit. These boxes are generally used for LED lighting and radio charging, and are checked relatively daily, so the LVD (for now) is user intervention, but having an automatic LVD would be nice.

In an ideal world, you’d want something like the ‘Watts-Up‘, which integrates the current and voltage, so you can compute the actual Watt-hours being used. This starts to increase the cost of the system, however. These meters are great, however, they don’t retain the Watt-hours values when you shut the power off, so as a ‘gas gauge’ in this particular application, they are of limited use, and of course, the load can affect the state of charge estimation. Measuring state of charge is tricky, but measuring voltage gets us part of the way there.

Final note: Eagle doesn’t have a schematic symbol for a voltmeter or an ammeter! A simple library for both is here; clipboard_meters.lbr (remove the “_.txt” extension; the file should have an .lbr extension to work with Eagle).

This entry was posted in articles and tagged projects, sensors. Bookmark the permalink.